What to read after SMOKED?

As you probably know, SMOKED is the final book in the Scorched series. And for those of you who have now finished it, you might be wondering what to read next from me!

And I do have a suggestion! 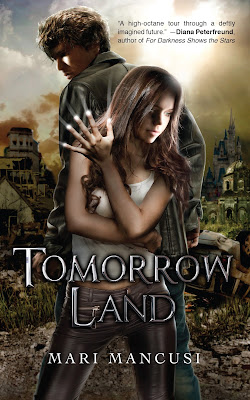 If you liked the voice of Scorched as well as the apocalyptic setting, the action, the adventure, you might try my novel TOMORROW LAND. It's not a dragon book--it's a ZOMBIE book! And it takes place in two time periods: just before the zombie apocalypse (as people start realizing it's happening) and four years after everything's gone down.

The premise of the book is that Walt Disney World is the last safe haven from the zombie apocalypse. Mankind's one human outpost left. And our hero and heroine and their companions have to make their way down to this outpost so the heroine, Peyton, can reunite with her scientist father. He's put some important information in her head that may help save the world. If she can get there to let him extract it.

In addition to zombies and apocalypses, there's a little bit of cyberpunk to the book as well. Peyton has been engineered by her father to be bigger, stronger, faster. With ocular implants in her eyes and retractable razors in her fingertips. Much like the heroine of her father's favorite book, Neuromancer. (One of my favorite books of all time, too!)

In other words, she's a zombie killing machine.

Anyway, I think it's a perfect "next book" for those who completed the Scorched series and I hope you will check it out. Here is the blurb and buy links below:

Nineteen-year-old Peyton Anderson will never forget the day she was forced to make a choice--between her family--and Chris Parker, the boy she'd given her heart. Now four years later, as she steps out from the fallout shelter and into a zombie-infested world, he's the only thing on her mind.

Thanks to her father Peyton is now built to survive: with razor tipped nails, ocular implants and cybernetics that make her stronger, faster, and able to protect herself in a world filled with monsters. Yet all the weapons in the world can't protect her heart when she runs into Chris again. The once sweet boy of her childhood has now grown into a tortured man--still furious at her for breaking his heart and never telling him why.

Now the two of them find themselves on the run, forced to fight their way down the monster strewn east coast to reach the last human outpost on Earth: Walt Disney World. Can they find a way to let go of old hurts and regain the love they lost--all while attempting to save what's left of the human race?

One other interesting note? The cover for Tomorrow Land was designed by the same artist who did the Scorched series!! Tony Sahara. He's awesome, don't you think??'

MARI
Posted by Mari Mancusi at 9:33 AM