How I Write What I Write


Thank you Annie Oldham for tagging me on this blog hop! Check out her website and see her answers to these questions as well! And check out her books! She writes awesome dystopian/post-apoc YA too! :) And she even has a dragon book!

What am I working on?

I just published my YA time-travel Arthurian fantasy THE CAMELOT CODE. So I’ve been trying to do some publicity/attention for that title. It’s a younger YA, perfect for readers 10 and up. Or just those who love Arthurian legend and would like to see it turned on its heels. In The Camelot Code King Arthur time travels to the 21st century, Googles himself and learns his destiny—then decides he’d rather play on the football team instead. It’s one of my favorite books I’ve ever written so I’m excited to share it with readers at last.

Also I’m hard at work on the third book in the SCORCHED series, called SMOKED. It’s kind of weird to be writing the third book when the second hasn’t been released yet. Like, I feel like I can’t talk about it too much, cause, spoilers. But I’m very excited at how it’s turning out so far!!

How does my work differ from others of its genre?

I often add a little (or a lot) of humor to my books. In a day when so much YA is dark and serious, I want to write stories that have not only action/adventure/romance – but also some fun.

Why do I write what I do?

I write what I love to read. I have a passion for dragons and fantasy and love time travel “what-ifs”. I also like fish out of water stories. Putting people into time periods or situations unfamiliar and letting them claw their way out! (Authors are evil like that!)

How does your writing process work?

I write best in the early mornings, sadly, which means a lot of coffee. When I’m polishing my first draft, I read everything out loud, to hear how it sounds, as well as what it looks like on the page.

But enough about me! I'm going to tag DIANA PETERFREUND for the next stop on this tour. Diana writes amazing classic-story retellings set in dystopian futuristic worlds. She also writes about killer unicorns, which, you know, is obviously awesome. 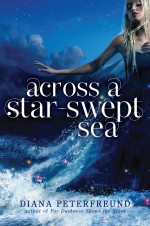 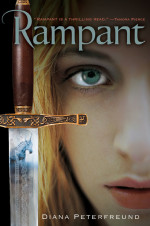 
Diana Peterfreund has published nine novels for adults and teens, including the four-book Secret Society Girl series (Bantam Dell), the “killer unicorn novels” Rampantand Ascendant (Harper Teen), and For Darkness Shows the Stars, a post-apocalyptic retelling of Jane Austen’sPersuasion. Her newest book, Across a Star-Swept Sea, is a companion novel inspired by the classic series The Scarlet Pimpernel. In addition, she’s written several critically acclaimed short stories and a variety of non-fiction essays about  popular children’s literature.  Diana lives in Washington D.C., with her family.