Want to help me countdown the days till Scorched's release date? Want to win prizes, score exclusive sneak peeks, and talk dragons with fellow readers? I've opened up a new Facebook group, TEAM DRAGON where we're going to do just that!

We're adding members now and taking ideas and will start the big push come August! I hope you will join us there!!!

Here's where you can join!

Mother of Dragons at Dragon Con!

As many of you probably already know, I am obsessed with Game of Thrones (the books AND the show!) I'm also releasing Scorched, my own dragon book in September. So, of course, when it came to picking out my cosplay for Dragon Con this year, I thought no further than the Mother of Dragons herself, the Khaleesi,  Daenerys Stormborn.

In fact, I actually have two costumes for the con. The first is her wedding dress from Season One where she married Khal Drogo. (She wears it again during the funeral pyre scene.) 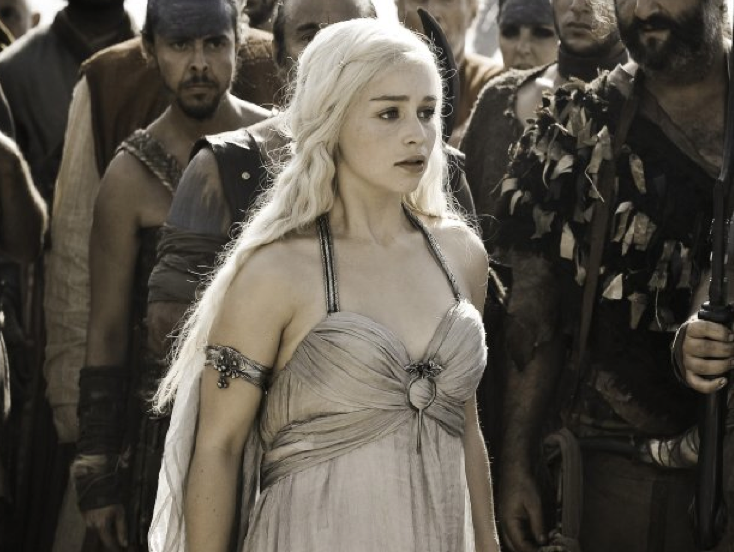 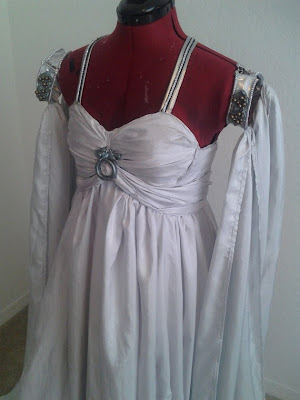 I found this seamstress on Etsy to make it for me. She did a great job!

And then, for another day, I commissioned the dress she wore in Qarth.

I have to admit, I'm a little worried about the cleavage in this one... :) But we'll see! 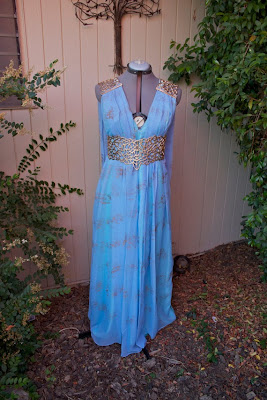 I have also ordered a custom wig and now all I need to get are my dragons!! I don't know if maybe for costume #1 I'll have the eggs and then costume #2 I'll have "live" dragons. Eggs might be a pain to carry around the con, but hey, sacrifices must be made!! (I'm also wondering if I should get purple contacts, so I can have purple eyes like she does in the books...)

The problem is I'm not only ATTENDING Dragon Con, I'm a guest, which means I'll be on a ton of panels. I'll also be selling copies of Scorched in a vendor booth. So I need costumes that can travel well as conversing from the Hyatt to the Marriott (YA Track to the Dark Fantasy and Horror Tracks) can be a bit....crazy.

I also have a third costume which is more vampire related than dragon related. I'll talk about that in a future post.

I apologize in advance - there may be MANY Dragon Con posts to come... I'm so excited to be going again this year!! And for the first time we have a hotel room in The Hyatt--so we'll be at the center of all action! 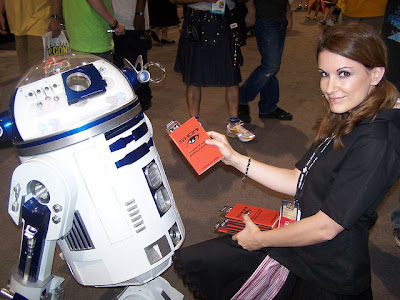 The photo above was from San Diego Comic Con back in 2007(?) when I was promoting Dorchester's new Shomi line. (Oh, how things have changed!) It was an amazing, somewhat daunting adventure and I've always wanted to go back. I've since gone to the New York Comic Con several times and done the Chicago Comic Con and the Austin Comic Con, but really, the ultimate Comic Con--the real deal--is San Diego and I've sadly never gotten a chance to return. Perhaps next year, when I'm promoting the paperback version of Scorched and its hardcover sequel, Shattered, I will get a chance to go.

In the meantime, I'll sit here and weep as everyone else has all the funs!

If you're also sitting at home, missing the awesome, may I suggest a quick and funny read to pass the time and dry your tears? My novella, KARMA KITTY GOES TO COMIC CON is on Kindle for 99 cents. It was originally part of an anthology that Julie Kenner and Jade Lee and I did together called "These Boots Were Made for Stomping."

Comic book creator Hailey Hills has no idea what she's in for when she arrives at New York City's Comic Con for the first time. But when a pair of magical boots manages to turn her into a real life Karma Kitty--the superhero of her own design--she suddenly finds herself battling ninjas, pirates, and the guy who got away.

You can one-click Karma Kitty here. :)


If you like the humor in my Blood Coven books, you'll probably like this one. Let's just say it revels in ridiculousness. Which, as you know, is my specialty. :) Well, that and cosplaying my characters. This is me as Karma Kitty, as described in the book... Check out those boots! But hey, I can't be too sad... Dragon Con is around the corner. And way till you see the costumes I have cooked up for that!!

Posted by Mari Mancusi at 6:29 AM No comments:

So here I am - out of Texas for the next couple weeks - and hanging out in North Conway, New Hampshire with my dad and stepmom. While they're getting quality time with their granddaughter, I'm holed up in my remote home office, writing Shattered. (Scorched 2) I know, it's crazy, Scorched #1 is not even out yet and I'm like halfway through writing the second book. Weird how that works.

One of the reasons Avalon and I came here was to escape the Texas heat. And yet it's been scorching (ha) since we got here. Even hotter than Austin on some days. Go figure! At least there's AC in my office. Also, I forgot how humid it is up here. Austin gets super hot, but it's a dry heat. And no mosquitoes to deal with. I got bitten alive on my run this morning. Argh!!!!

That said, it's really gorgeous up here and Avalon's having a blast and I'm getting a ton of writing done so I can't really complain! :)

Also, I need to enjoy the calm before the storm of the Scorch launch events. Once fall hits, I'm going to be one busy author. Going to Dragon Con in Atlanta, touring Texas, doing Heather Brewer's awesome Less than Three anti-bullying conference in Saint Louis - and a sci-fi con called Conclave - based in DC - that has George RR Martin as a featured guest. (Yes, I'm SO going to fan girl him!)


So yeah, awesome stuff on tap. But it'll be a little crazy. It all ends with a family vacation at Disney World over Christmas though - so I have that to look forward to!! (Those of you who know me know how crazy I am about Disney World...)


In addition to in-person appearances, I'll be hanging out all over the innerwebs next month doing a blog tour and some other exciting promotions. Sourcebooks has a ton of stuff up their sleeves and I cannot wait to announce it. They are really going all out for Scorched and that makes me super happy!!

And if that isn't enough, I have a new series on submission and a film agent shopping Scorched to Hollywood. Woot!

So that's what's going on with Mari! Keep entering the Divergent giveaway and I'll be posting another giveaway soon!

Cory Monteith: When the stars go out

So sad to wake up to Twitter reports of Cory Monteith's death. I got a chance to meet him at an event a couple years ago and did an interview with him for the television show I was working for back then. He was so playful, so goofy and fun-loving. So full of life. The event was some silly advertisement for Marshals or TJ Maxx - can't remember - but he didn't care. He grinned for all the girls and wore those silly reindeer antlers you see below the entire time. 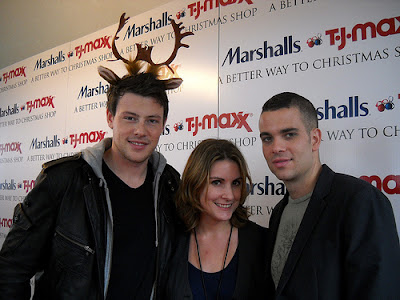 I'm not a regular Glee watcher, but after that I considered myself a Cory Monteith fan girl. It's so sad to see him pass away so young. Sad to know that under that playful smile he was hurting and troubled. All the success and fame in the world doesn't mean a thing if you can't find peace inside yourself.

So as you know, I've been going to a gazillion events over the last few months. And there have been a LOT of free books to take home. I tried to be good -- really I did!  But I ended up with just TOO MANY BOOKS and my bookcases are overflowing.

SO... I've decided to start doing some giveaways leading up to the launch of SCORCHED! Some of the books will be autographed by the authors themselves. Some will be advanced copies of books not yet in store. ALL will be awesome.

I figured it was best to start out with a bang! So giveaway #1 is going to be a SIGNED paperback copy of DIVERGENT by the lovely Veronica Roth. I was fortunate to briefly meet Veronica at the RT Convention this year and she was extremely lovely. I can't wait for the movie!

Obviously you'd have to be living under a rock to not know Divergent, but just in case--here's a cover/description for you. And the Rafflecopter giveaway is below! Enter early and often and may the odds be EVER IN YOUR FAVOR!! (OK wrong book, but I couldn't resist!) 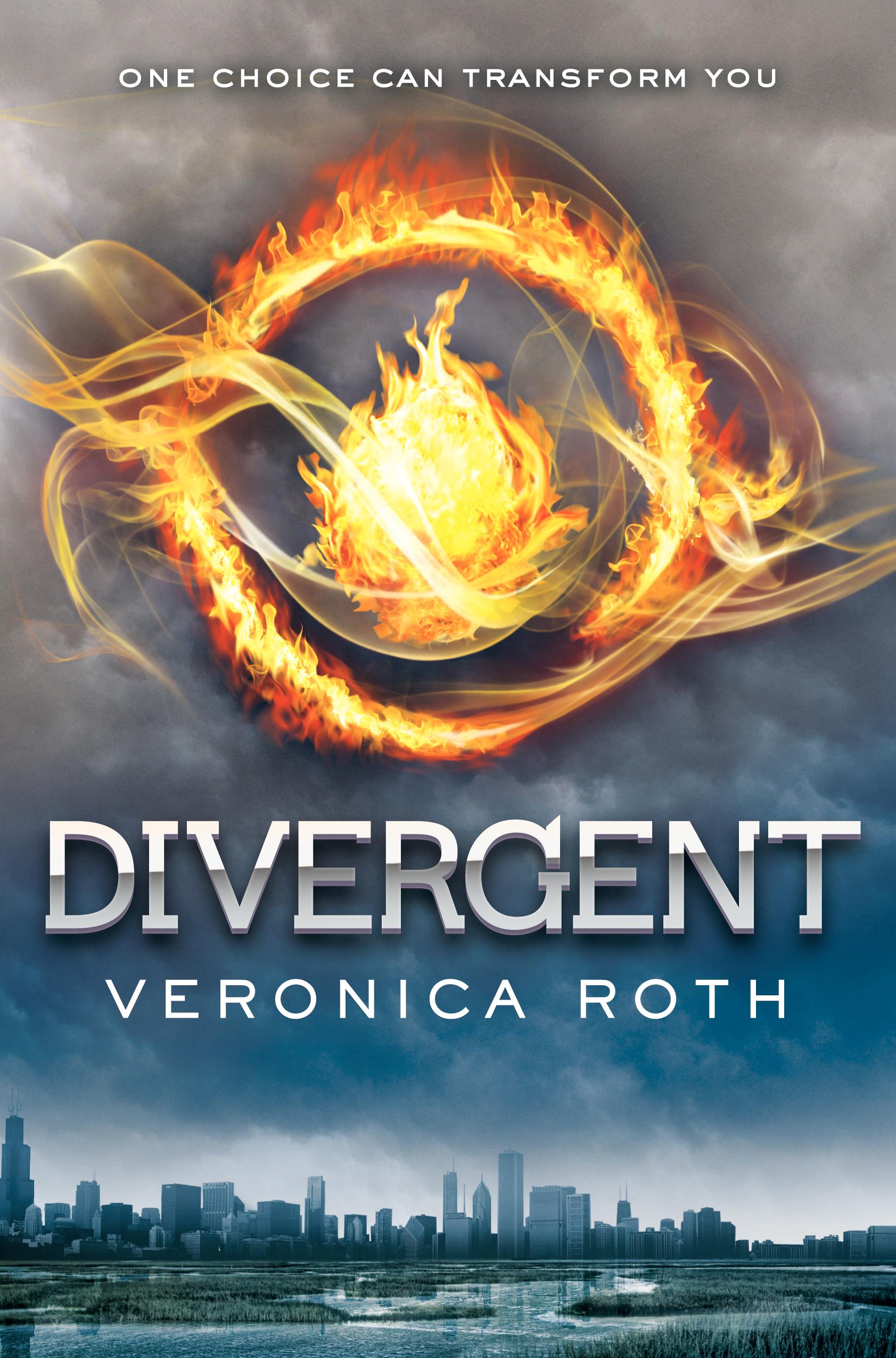 In Beatrice Prior's dystopian Chicago, society is divided into five factions, each dedicated to the cultivation of a particular virtue—Candor (the honest), Abnegation (the selfless), Dauntless (the brave), Amity (the peaceful), and Erudite (the intelligent). On an appointed day of every year, all sixteen-year-olds must select the faction to which they will devote the rest of their lives. For Beatrice, the decision is between staying with her family and being who she really is—she can't have both. So she makes a choice that surprises everyone, including herself.

During the highly competitive initiation that follows, Beatrice renames herself Tris and struggles to determine who her friends really are—and where, exactly, a romance with a sometimes fascinating, sometimes infuriating boy fits into the life she's chosen. But Tris also has a secret, one she's kept hidden from everyone because she's been warned it can mean death. And as she discovers a growing conflict that threatens to unravel her seemingly perfect society, she also learns that her secret might help her save those she loves . . . or it might destroy her.


a Rafflecopter giveaway
Posted by Mari Mancusi at 3:50 PM 39 comments:

Here there be dragons!

What better way to celebrate the 4th of July than with DRAGONS!? We're going to the dragon circus today! Bound to be HOT! :)


Posted by Mari Mancusi at 6:17 AM No comments:

The last few months have been a whirlwind for me - traveling all over the country to different events to promote Scorched and hand out signed advanced copies of the book. ALA was my FINAL event until publication in September (at that point there will be tons of signings and a Texas tour, so stay tuned for that.)

In the meantime, I get to take a breather. Which, by breather, I mean I finish the first draft of book 2 in the series -- Shattered. I'm about halfway through now and will be spending the next two months finishing it up. It's strange to me, actually, to be working on book 2 when book 1 hasn't even been released yet, but that's the way it goes in the publishing world. After all, you don't want to have to wait YEARS between books, now do you?

In case you were curious - Scorched is designed to be a trilogy. Each book will come out in September in hardcover, followed by a paperback edition the following year. Of course Blood Coven was meant to be a trilogy once upon a time. And then there were eight books. So who knows! :) Buy the books, tell your friends, make the series super popular and I'll keep writing. :) Yup, it's really in your hands!!

ANYWAY! What I really wanted to offer you was a chance to get a sneak peek at Scorched - so you can have something to tide you over (or whet your appetite) until September.

So here you go! The first FOUR CHAPTERS of Scorched! Enjoy and let me know what you think!