Wow - BEA (the Book Expo of America) has been insanely great! So great I've been a blogger slacker! I have taken lots of photos though so I hopefully I can do a good wrap-up.

I arrived on Weds and met up with my partner-in-crime for the week, Diana Peterfreund, who came in from DC. Diana's here to promote her amazing Across a Starswept Sea, the companion novel to For Darkness Shows the Stars. You don't need to read the first book to enjoy this one - BUT you should anyway cause it's a great book in and of itself. I got a chance to read an early copy of Starswept and it is AMAZING. Seriously pre-order now.

Weds night I participated in the Teen Author Carnival, put on my the amazing Mitali Dave. It took place at the Jefferson Market Library which was packed. We did two sessions - one on creating worlds and one on kick-butt heroines. There were like 8 people on each panel and every one gave either insightful or hilarious answers. For example Erin Bowman driven to literal tears when I told my Pennywise the Clown at Dragon*Con story. (Turns out she has a serious clown phobia! Sorry Erin!) Sarah Mass (Throne of Glass) and Susan Denard (Something Strange and Deadly) were their typical hilarious selves. Can't wait to panel with them again at Dragon*Con!

Here's a photo of the whole group: 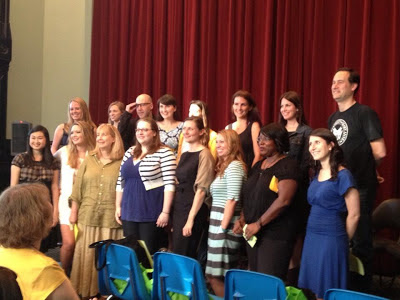 After the Teen Author Carnival I went out to dinner with Melissa Walker, Tiffany Schmidt, Laura Whitaker (editor at Walker), Diana Peterfreund, Lauren and Tricia. We had margaritas and resisted the urge (Diana, Tiffany and I) of talking about our babies!

That's just the very beginning of the awesome week, but Diana's looking at me like "Go shower so we can go eat!" so more later!