For those of you keeping track - I've now made three novels and two novellas available to Kindle and Nook readers. These are books that were once sold as paperbacks, but I now have the rights reverted.

Today I want to feature my dystopian romantic thriller - MOONGAZER. Moongazer is darker than most of my books, but I think it's one of my best. I actually first wrote it as a screenplay in college and then rewrote it as a novel a few years back. I had no idea at the time that dystopian novels would become so popular!

I hope some of you will check it out. This is my experiment - to try to offer books I've written that have gone out of print in an inexpensive e-format for those who want to read my backlist. If it's successful, I will upload some of the other out-of-print titles as well. As with the others, it is now available for download for just $2.99. 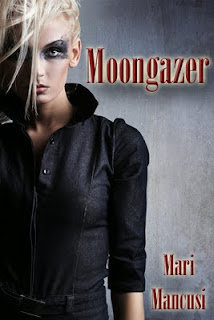 "An enthralling combination of The Matrix and Snow Crash with a bit of Blade Runner thrown into the mix." -- SF Scope


Imagine every night entering a nightmare world you can't escape and being told real life is a dream. Skye Brown has it all: the cool job, the hot boyfriend, the apartment on New York's Upper West Side. But lately she can't enjoy any of it. She's having dreams of a post-apocalyptic world. Of a bleak futuristic wasteland. Of a struggle against oppression. And she's been told she's a...

But what is that? And what is reality? In her dreams, she's not Skye Brown at all, but Mariah Quinn. In her dreams there's Dawn, the beautiful yet haunted soldier, and Skye is but the empty shell of a girl he once loved. And there was a betrayal, a great betrayal. Ripped between Dark Siders and club kids, the mundane and the mystic, Skye must discover who she is, what she wants and who wants her. And why. But in the glow of the moon, it's not always easy to recognize the face in the mirror.

KINDLE VERSION
NOOK VERSION
SMASHWORDS (for all other e-versions)
Posted by Mari Mancusi at 10:55 AM

I just read Moongazer, I had bought it years ago because I liked the cover and name. It is the first I have read from your works but not the only one I have bought. I was wondering if there was ever a second book with the same characters?

Thanks! I'm so glad you liked Moongazer. Unfortunately it's a standalone book - no sequel. :( Maybe someday I'll write one - would love to revisit the world!

Have you written a sequel? I'd love to see the characters again, this is my favorite book of all time

Thanks Melanie! I never did write a sequel, sadly. I would love to do it someday though. It would be fun to revisit the world. I appreciate you commenting though! Love that it's your favorite book of mine!!

I love the book!Read it several times and still want to read it again. Would love to know what happens next. You should truly think about a sequel or series. i would by them all.