I'm super behind in sharing all the awesome events like DragonCon and my book release party at Book People with you all. And I promise to get there! But in the meantime, I'm so excited that Scorched is now on the shelves and everyone's getting their copies.

I have to say though, one of the most fun parts of this whole release has been getting people to "pet the dragon." Have you heard about this? If you peel off the dust jacket of Scorched you'll not only find a hidden dragon--but one with scales you can actually touch and feel. 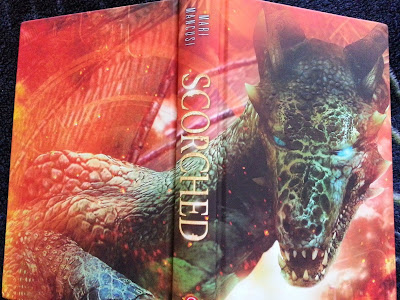 I've tried to explain this to people, but until they actually touch the book, they don't quite grasp just how cool this feature is. At DragonCon we literally had people buying the book with no idea what it was about JUST because of the petable dragon.

So I won't say anything else except head to your local bookstore and pet the dragon yourself! And then come back here and let me know what you think!

Someone told me maybe book 2 should have a scratch and sniff feature. :)

I love Emmy!! My boys keep stroking the book while Im trying to read. I keep trying to explain to my 3 yr old that I need to read the book but he insists that Emmy needs to be petted ;) It is such an unusual feature and looks amazing.

A brimstone scent? You are giving us more than amazing material to anticipate! :)