This week's post-apocalyptic chat comes from the lovely Annie Oldham, author of The Burn series. For those of you who haven't read it yet, here's a little intro. 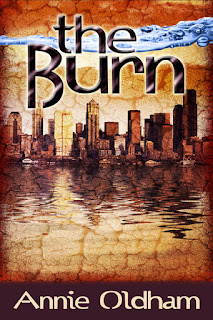 The Burn is full of nuclear fallout, roving gangs, anarchy, unreliable plumbing. That's what Terra's father tells her. She has lived her whole life in comfort in a colony at the bottom of the Pacific Ocean. She hates it. And she would pay any price to leave. But when Terra finally escapes the colony, she finds out her father is right. She finds a group of survivors that quickly become friends, and every day with them is a race for survival. When she witnesses and commits unspeakable acts, she has to decide where her loyalty lies: with the colony she despises or the Burn, where every day is filled with nightmares.

Sounds awesome right? Except for the unreliable plumbing. Seriously - that's the part most people never think of when they think of the apocalypse. Mutant zombies--a handy dandy shotgun can take care of that. No flush toilets? That's a deal breaker.

One of my favorite things about post-apocalyptic fiction is the world-building. Since we aren't living in the end of days (at least not yet) it's up to each author to offer up his or her vision of what things would be like.

I asked Annie to explain how she came up with her own personal apocalypse. Check it out! And don't forget to enter to win an e-copy of The Burn and it's sequel, Infraction.


Annie, take it away!

Everyone is apprehensive of the future. Some of us give it a passing glance every so often, others of us are downright paranoid about it. I think that's why so many readers love—and why I enjoy writing—a post-apocalyptic world. It's the grand game of “What if...?” 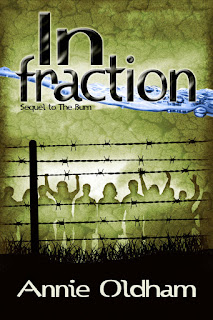 Just by its very nature you can bet that things will get intense and that there will be no small stories there. A dystopian government? A race for survival? Desperation at every turn? Zombies or some other plague? You can bet at least one of those will pop up in this genre. That's what makes it so fun. You can ask “What if...?” as many times as you'd like, and chances are, you're not going to go too far over the top.

But the post-apocalyptic setting is just the framework of the story. If you don't have real, flesh-and-blood characters driving the story along—characters that learn and grow and feel—the story will succumb to its seemingly impossible circumstances. No one will be able to suspend their disbelief long enough to see the story through. One of my readers told me that Infraction scared her because she could see the future I created actually happening. If she hadn't become invested in the characters, she wouldn't have had that emotional response.

I've enjoyed writing The Burn series so much because it focuses on what a good person does in the face of such unbelievable circumstances. Crafting this world where the government tries to control its citizens to the point of privacy invasion and brainwashing is frightening, but could border on implausible. I keep it real by creating good people to live the story. Good people who don't necessarily do impossible things. No one single-handedly takes down the government or saves the world. But they're good characters doing what's right in incredible circumstances, and I think that's the most poignant story to tell. Because we've all been there.

Adding the post-apocalyptic setting is just icing on the cake.

Want more? Of course you do! Here's all the info you need to know! And make sure to enter the contest before you leave!! Oh and check out MY post over at Annie's blog about creating MY post-apocalyptic world. (Hint: Just add zombies.) You can win a copy of Tomorrow Land.

Away from her writing, Annie Oldham is the mother of the three most adorable girls in the world, has the best husband in the world, and lives in the hottest place in the world (not really, but Phoenix sure feels like it). When she's not writing or wrangling children (yes, it does actually happen), she loves to cook, sing, and play the piano.

a Rafflecopter giveaway
Posted by Mari Mancusi at 8:11 AM

I think you would have to include Zombies or mutants of some kind!! These books sound awesome :)

My post-apocalyptic world would involve fire. A lot of fire.